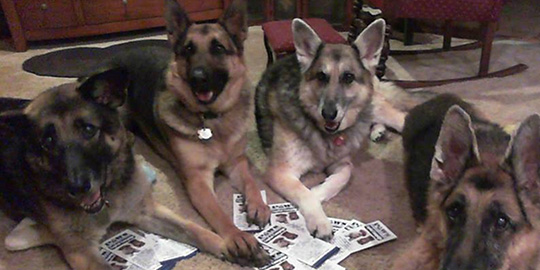 “I’m cold, I’m wet…I’m starving. What did I do wrong? Why do they keep me tied to this tree? I can see them smiling, eating and playing inside. I call out and try to get their attention but they don’t see me. They don’t seem to care. I wish they would  bring me inside where it’s warm. I too want to smile, eat, play and be loved.

The week of February 7 is “Have a Heart for Chained Dogs” week.

Times are changing. The lives of pets are slowly improving everyday because of good people who care. Here is one account where a kind woman transformed the life of one dog.

This is Joseph’s story. A chained dog that gained worldwide attention and helped create new laws in Ohio.

Change Is In The Air

Joseph, a German Shepherd dog, was rescued on September 23, 2013. The police and the local PAWS Animal Adoption Center rescued him from deplorable conditions. His story went viral in hours and support (both emotional and monetary) poured in from around the world.  It is estimated that he was chained to a tree for four of his five years. He was found with little water or food and was full of fleas and ticks. Extremely emaciated, Joseph also had a bad case of heartworm and extreme dental issues. People made donations from as far away as Asia and even one of the Miami Dolphin’s football player celebrities was  on his side.

Look at the difference a little LOVE makes.

A Legacy To Remember

I am very sad to report, Joseph’s kind, forgiving soul crossed the rainbow bridge on January, 6, 2016. He took his last breath in the arms of his savior. A woman who in a fraction of his life gave him all the love he deserved in his lifetime. RIP Joseph. Your legacy will live on.

Gail Corrill, opened her arms and her heart to Joseph. She took him in and welcomed him into the family where 3 other sister German Shepherds surrounded him with love. She said, “The “girls” took to him right away and they are all a family now.” September 23 was deemed his new birthday. Joseph’s life helped raise awareness of the cruelty behind dog chaining. He gained many followers and supporters nationwide and around the world on Facebook. Joseph’s story touched many lives, he was very much loved.

One of his rescuers formed Justice for Joseph (now called Joseph’s Legacy) to fight on behalf of Joseph and animals everywhere. Because of his story, a huge push was made and the laws succeeded in being changed to make animal abuse a felony in Ohio.

You too can change the life of a chained dog. Here are some resources with more information:

What are YOUR thoughts on unchaining dogs and ideas on how people can help?