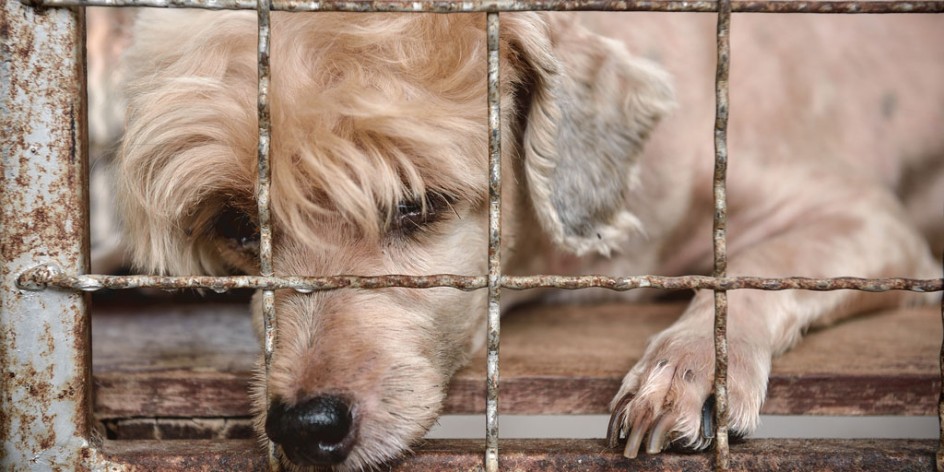 “Day in and day out I look through these bars. Most of the time I have puppies, but they are soon taken away from me, barely old enough to be on their own. When the humans snatched my first pups, I was sad and depressed, but now… now it happens all the time. I’m tired and in pain, the humans don’t care. I hope my puppies have a better life than me.” — nameless, faceless dog

Puppy Mills, also known as Puppy Farms, are large-scale animal breeding “businesses” that put profit ahead of the health and well-being of the animals under their care. These places are often in rural areas where there are few neighbors and the conditions are often deplorable: endless rows of cramped cages with barely enough room for the dogs to move around, fecal matter falling through wire cage bottoms onto other caged canines, little to no proper nutrition or access to veterinary care, and often no protection from the elements, just to scratch the surface.

September 19th is Puppy Mill Awareness Day, and although it may be a difficult subject to cover, it’s important to educate future adopters as to the realities of this shocking trade and its widespread consequences.

Red Flags of a Puppy Mill

If you know what to look out for, there are signs you may be dealing with a puppy mill. They include:

Combined with the already horrifying living conditions of dogs in these breeding prisons, this may sound like a depraved scene from a horror movie, but it is a reality for far too many puppies. In fact, according to the Humane Society of the United States there are approximately 10,000 of these farms in operation today, with approximately 2.1 million puppies and “stock” females — breeding females kept for the sole purpose of procreation — currently suffering in the hands of individuals looking to get rich quick as backyard breeders.

The Health of a Milled Puppy

With so many puppies being produced across the country, it’s easy to guess where the majority end up. Most cities and municipal shelters are too small to support the influx of hundreds of puppies, so millers will sell them to brokers, who then sell them to pet stores locally and across the country. With the lucrative business of breeding and shipping puppies, this means that all too often, those sweet little doggies in the window are most likely the products of a puppy mill. Overflow milled pups are oftentimes sold on places like Kijiji and Craigslist, via print ads, or even out of boxes at flea markets or in front of grocery stores.

As cute as it might seem at first, that adorable pup playing in the pet shop window could be carrying a host of unseen problems like genetic disorders, behavior problems, parasites, or other viral or terminal illnesses. This is all due to the fact that puppy farm proprietors do not take the time to properly select the mother and father or provide adequate medical care. Male and female may even be related, but a determined miller may disregard obvious genetic dangers to continue the puppy-making process.

“My family and I were victims of a puppy mill. I was in my late teens when I saw a beautiful Dachshund puppy in the window of the mall pet store. He was the only Dachshund in group of five other puppies and it was love at first sight. I marched into the store plunked down five hundred plus of my hard-earned dollars and brought my new furbaby home.

At first the pup was okay, but it didn’t take long before he started to vomit and have bloody diarrhea. We immediately made an appointment with the veterinarian and was soon told my baby had Parvo Virus — a killer disease with a high mortality rate — so I did the humane thing and said goodbye to my new love.

It was devastating, heartbreaking, and unfair. My only solace was that Zac didn’t have to die in the store and was shown tremendous love in his few short days in my home.

But I didn’t stop there. I alerted the local media, stood outside the store, and told my story to passerby. Though I was banned, I made the owner’s life miserable as I insisted on getting my money back. To make a long story short, it took a threatening letter from a lawyer to get any kind of retribution. That store continued to sell puppies, but soon went out of business and I secretly hope I had something to do with it.”  –Sandie

What Can You Do?

Don’t fall victim to puppy milling. Before you bring a puppy into your home, do your research on the facility it is coming from. Meet the mom and dad of your puppy and tour where the pups are being raised. If the seller will not show you the parents or where the puppies are being housed (i.e. he/she brings the puppy to you while you wait in a “suitable” area), this could be a sign of a not-so-reputable breeder. In addition, never buy a puppy sight-unseen off a web site or from an ad.  Puppy millers are usually more than happy to ship you a dog and what you see in the ad may not be what you get.

This is a difficult situation as most people feel they are rescuing the puppy from a horrible fate, but according to a California study, 48 percent of puppies sold at pet stores are already ill or incubating an illness and almost 100 percent of them have parasites. Is it fair to leave a puppy because of these statistics?  No, but this industry produces approximately 500,000 puppies annually which means about one million female breeders are living a life of being caged and pregnant, never tasting the sweet freedom of a simple walk on the cool grass or the touch of a loving human being. If we continue to purchase puppies from pet stores and “backyard breeders” we are only adding to the problem – if the demand stops, so will the milling practice.

Finally perhaps one of the most important things you can do as a responsible pet parent is to adopt not shop.  There are many homeless animals just waiting for a chance to give some unconditional love, won’t you be their hero? However, if you feel you must purchase a dog then do so only with an accredited, responsible breeder.